One of the things that inspire me to become a Narrative Designer is the crafting of a story. The individual events which prominently develop a character, engaging the reader (aka – the player) with a sense of determination and admiration for the people there playing. Once the game has been completed from prologue to climax, a mutual respect for the characters, which you’ve spent over 40 or so hours playing, are harbored by the players and their story is appreciated at the closing of the tale. In Square-Enix’s Octopath Traveler it’s successfully implemented with eight travelers, eight stories and eight perspectives to a grand storyline. 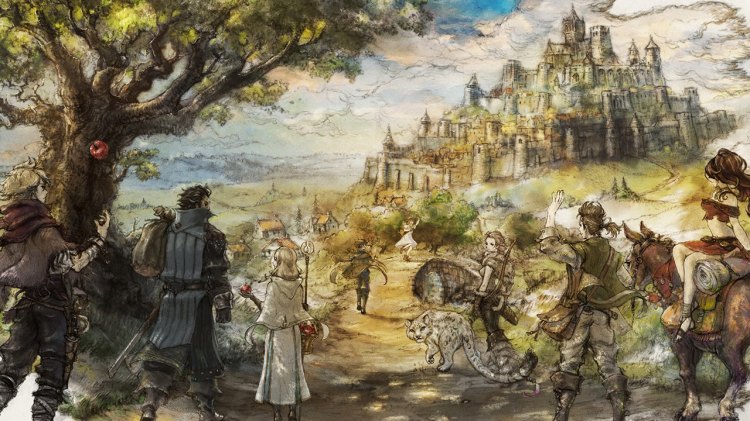 One of the most intriguing things about Octopath Traveler is its story and how it revolves around eight characters to which you can start the story with based on personal preferences, job classes, or on blind faith. The characters of which you can choose range from a kind-hearted apothecary named Alfyn, an enslaved dancer by the name of Primrose, a former knight named Olberic, a young merchant by the name of Tressa, an astute scholar named Cyrus, a cool-headed thief named Therion, a young huntress by the name of Haanit and a religious cleric named Ophilia. Each of the character’s tales will remark on a beginning prologue that is capitalized in their own individual episodes. Whether it’s from Alfyn’s daring task to retrieve poisonous venom from a snake that’s claimed the lives of many villagers without fear or Primrose’s dedication to finding clues about the death of her father while forced to dance, and sexually engage, with the underbelly of the criminal world in order to find the truth – is paced and retconned with twists that subvert the expectations of class the character begins in. Over time, the stories become more pronounced with bigger threats, unexpected shifts in deliberated acts and ventures into a story that connects all eight characters to specific events which make the story whole.

Octopath Traveler’s combat, in much the ways of its art style, is a mixture of old and new concepts from the vintage realms of turn-based JRPG’s. The 2D plains are enhanced by the Unreal Engine, embedding it with 3D visualizations, making the continent of Osterra into a beautiful land, each with new areas to traverse and to explore. An atmosphere of realism is added to each touch of the six regions that you’ll explore. Whether it’s the glittering shine of the water that dances upon the surface when exploring the Coastlands, the luminescent snow that decorates the landscape in the Frostlands, the lush settings of the green bellows with the sounds of the river flowing in the Riverlands, the desert winds that work in combination with the hot bearings of the sun in the Sunlands and the steep canyons of the Highlands all deliver an immersive scene to the adventures of each character.

A number of towns are littered across Osterra, introducing a cast of characters, pivotal to the plot of the main eight, while also introducing a number of individuals that are relevant to the many side-stories littered throughout the game. The game also plays upon the roles of the main eight by allowing you to use their natural talents within towns to acquire information or treasure; increasing the spoils whenever a new character enters into the fray of another’s story. Each talent is used in conjunction to benefit a requirement or a unique trope, that can only be done with their specialized skills. For example, characters like Olberic and Haanit are capable of fighting against almost every NPC that you can find on the map in order to clear them from a path or a door that’s blocking your path; with the exception of small children, no matter how ignorant they may be. Other characters like Alfyn and Cyrus will play more of an informative role in fleshing out the background on certain NPC’s, Primrose and Ophilia will use their talents to recruit other NPC’s who, based on a 10 star level of combat rating, can assist in battle and Tressa’s skill allows for you to buy different items and weapons for a calculated price; while on the other hand, Therion’s skill allows for you steal said items with a percent chance of success and failure based on his level. The contrast between all eight skills are determined based on experience for some (Procuring higher levels for effective use of the ability) and the ability to access the skills without limitations (Usually implying that their’s a game of chance and percentage in the skill being successful when activated.). 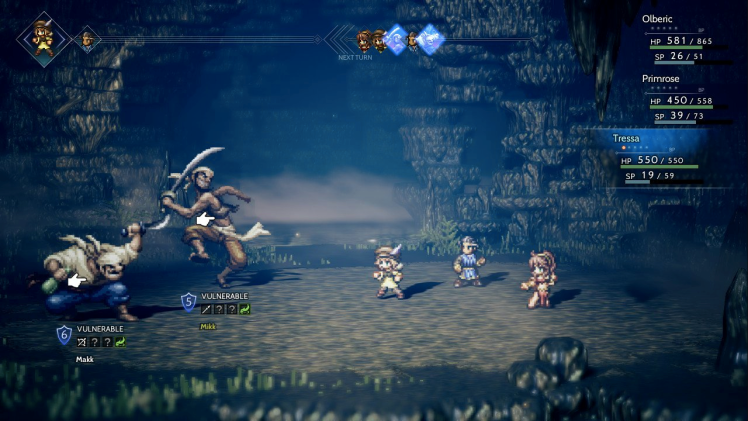 Battles are initiated at random when traversing the plains or inside of the many dungeons scattered throughout the story, shifting into a dynamic view that seems ripped right out of an old-school Final Fantasy game from the SNES. Four party members will battle groups of enemies, rewarded with experience and various forms of loot upon their defeat. During the battle, the characters have the ability to unleash powerful attacks related to their attacks, using specific weapons and magical attacks that are effective against their enemies. The game enhances this experience by introducing the “Break System” which allows the player to decrease the shields an enemy has against your attacks by hitting it with a weapon, or element, that decreases its shields. When the shields are broken, the game allows for you to unleash powerful attacks on the enemy with four free turns, racking a large amount of damage against one enemy or groups of them. This combat system keeps the game interesting, making it easy for beginners in the beginning and advanced for later developments within the story, adding a level of depth to the simplistic style which Octopath crafts from beginning.

A treat to the eyes through its classic impressions, Octopath Traveler plays on the strings of both visual and auditory senses. Composer Yasunori Nishiki, who shines as the leading game composer, incorporates a blend of different sounds to the game’s background. Most of the music that is heard within the game is orchestral, however, various tunes that are scattered in the game take from different genres of pop, rock, metal and electronic. From the tense moments that require a dramatic stand with trumpets and piano’s, to more solemn tunes that flow with the orchestral waves of a flute ensemble. Nishiki’s contributions to the game blend with every emotional scene which has personally made me invested into the future projects that he’ll be a part of as his first role as leading game composer have shown promise to his future prospects.

In conclusion, Ocotopath Traveler is a fantastic RPG that is a must buy for fans, new and old, to experience. The stories weaved between eight different characters, fantastic ambiance in both music and gameplay, put this JRPG at the top for RPG’s of 2018. There are a couple of minor moments which makes the game feel a little too tedious or repetitive, however, if you’re able to travel past those hard facts – an adventurous experience lies at the end of your journey.